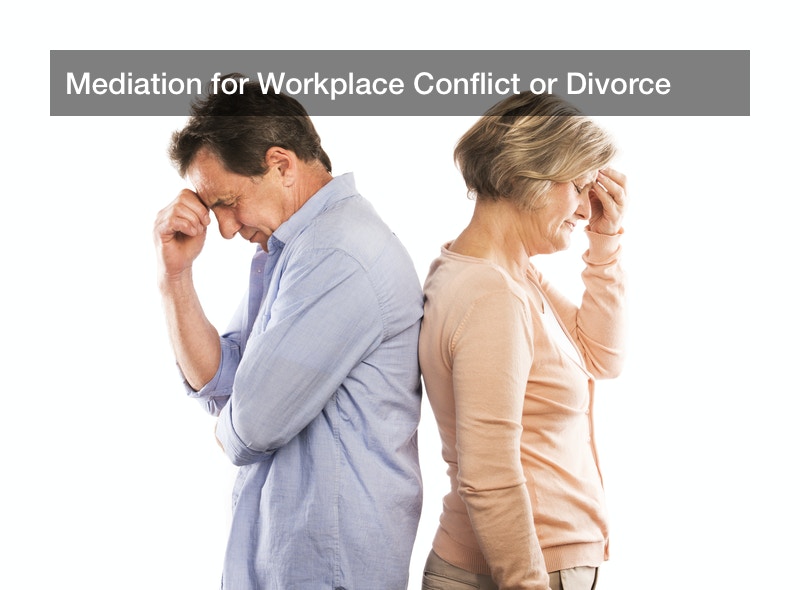 For the most part, working professional Americans are well-behaved and treat each other with dignity and compassion, to allow for an efficient and welcoming work place for all. Sometimes, however, one or more people at the office will intentionally create a hostile environment and start bullying, harassing, or otherwise mistreating their peers or their employees, and this will usually call for workplace mediation. Workplace disputes don’t often go to court, but they can, so all involved parties may want try and resolve the matter via mediation first (to save time and money, to say the least). Meanwhile, it may also be noted that some divorces do not call for the aid of divorce lawyers or child custody lawyers; instead, divorce mediation can be done, and divorce mediation tends to be much cheaper, easier, and more private than going to divorce court. What is there to know as you mediate your divorce, or seek a solution to workplace conflict?

It is believed that around 40% of all modern American marriages end in divorce, and Americans divorce for many different reasons. Some divorces are quite messy and emotional affairs, such as if one spouse was unfaithful and marriage counseling couldn’t fix the situation. Some other spouses seek divorce because their partner is physically or sexually abusive, or they have a serious drug or alcohol abuse problem. Meanwhile, other divorces take place for more mundane but no less valid reasons, such as if the two spouses simply lose interest in each other, or if they realize that they have very different spending habit or lifestyles. In cases like these, it may not be worth the money or hassle to hire lawyers; instead, divorce mediation can do the job.

In a low-intensity divorce that has relatively little at stake, the two spouses will directly negotiate and agree on the terms of their divorce, and an outside third party will help: a mediator. This mediator is more of a referee than a lawyer, and they will not take sides, nor will they offer their own ideas or suggestions unless asked. Instead, divorce mediation means drawing out productive and good ideas from each party and helping them communicate those ideas clearly, so the two spouses can arrange their divorce terms properly and stick to them. A marriage with relatively little to fight over, such as money or cars or houses, may be fairly easy to negotiate, especially if there are no children involved and thus no need for child custody lawyers. On a final note, a mediated divorce will almost certainly be faster and cheaper than one that involves attorneys, and it will be more private, too, since a mediated divorce does not go through court.

In general, employees at a work place will be professional and agreeable to one another, but sometimes, certain parties are openly antagonistic, and workplace conflicts will erupt. This often takes the form of verbal, written, or physical intimidation, taunting, or other harassment to make the targeted party feel unwelcome, invalidated, or even unsafe at the workplace. Such harassment can take the form of unfair denial of promotions, raises, or other opportunities, too. Harassment might be done for any reason, but it can run the gamut from personal grudges to targeting the victim based on their real or perceived disability, religious faith, ethnic identity, sexual orientation, and more. Often, employees today quit their jobs not because of low pay, but because of a hostile work environment or a lack of opportunities for growth. A bullied employee is likely to quit if no one helps them, and high turnover rates are never to be desired.

An employee who experiences such mistreatment is urged to not retaliate. Instead, they should consult the HR department and work with a workplace conflict mediator with the offending party, and the victim is urged to clearly recall and relate the details of the incident (time, place, people involved, anything that was said/written/done, etc). The victim is also urged to keep a cool head and to not have any outbursts. A mediator can help all parties involved resolve their differences, and solutions may range anywhere from an expressed apology to moving both parties far apart for their future work in the office.